In a sudden flurry of activity, I've actually finished a project!

Here we have my version of the Cinnabar Cardigan (Ravelry Link) from Everyday Crochet by Doris Chan. The yarn is James C. Brett Denim with Wool in an Aran weight, which I picked up from a trader at a Machine Knitters Guild event about 18 months ago. I used one ball (400g) and I worked the bulk of the cardigan on a 7mm hook to achive gauge with a 6.5mm hook for the borders.

I chose to make the smallest size, so that's to give a finished bust measurement of 35 inches or 88 cm - this is based on my normal sizing so the resulting cardi fits me properly in the shoulders otherwise I would have been drowned in fabric.

As I wanted this cardigan for both maternity and normal wear, I decided to lengthen the body by adding four rows before starting on the band. The longer line just looks better with the bump, but hopefully not so long it will look silly once I return to something resembling my normal proportions. Rather than relying on a pin or a removable fastening which might not work well with a baby, I added button holes and three buttons which I picked up from Mrs T's (Ravelry Link). The buttons are actually purple, but take on the blue of the yarn which softens them so they work well with the overall colour of the garment. I also decided to skip the sleeve tapering, giving me looser arms but deliberately shortened them slightly as I hate my cuffs dragging in things. Other than that though, the cardigan is made up as per the pattern and I'm quite pleased with the final result. It fits well across the shoulders and I think the colour works well on me, although not one I'd have normally chosen. Not at all bad for my first ever cardigan.
Posted by Julie Spriddle at 16:34 2 comments:

Email ThisBlogThis!Share to TwitterShare to FacebookShare to Pinterest
Labels: crochet

Of boilers and butterflies

This week was the first of two weeks holiday from work and it's been rather hectic.

The week started with fitters from British Gas turning up to replace my ancient gas boiler with a new, energy efficient one. Naturally the mains gas pipe needed to be replaced and Monday morning started with an animated discussion about where the pipe was to be run. The gas fitter wanted to run it along the outside of the building at about head height, all the way around the house to my kitchen where he'd poke it through the wall.

I vetoed this idea, sticking to my guns, refusing to give permission and pursuing other routes until eventually the fitter relented. The final route for the pipe took it up the wall, under the bedroom floors, through the house and dropping through the kitchen ceiling. Once agreement had been struck work began and my house turned into a building site.

I've got to admit though, once the fitters got started they got on with it and were done by 1pm the next day! There was one incident in the shed involving a tin of paint but otherwise things went fairly smoothly. The worksheets the fitters had didn't match my invoices which left them a bit disgruntled, but since I had written evidence of what I'd ordered, they had no choice but to do as was on my paper work.

So all sorted and we now have heating and hot water once more.

This weekend is the first Maelstrom event of the year and quite possibly the only one Dave is going to make, so I've been left to my own devices for a few days. Saturday saw me head off to Stratford with Richard to visit the Butterfly Farm which is a five minute walk from the town centre.

The Butterfly Farm isn't huge, consisting of one large hot house and a couple of specialist buildings housing caterpillars, spiders and various insects.

Once inside the hot house there were butterflies everywhere, quite happily fluttering around visitors and landing on anyone who looked vaguely interesting.

Richard proved to be a great hit with the butterflies - here he is with a new friend and trying to take a photo... 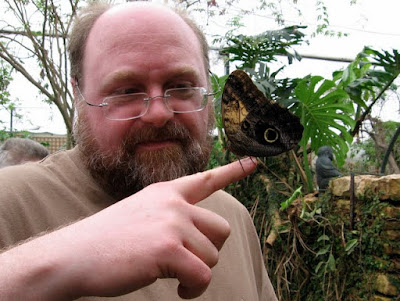 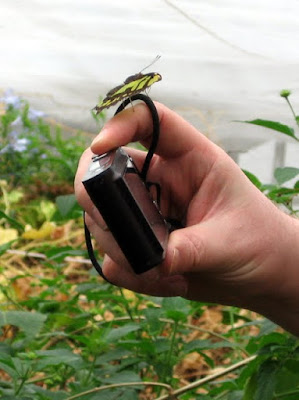 For once, I took lots of pictures although only about half of them came out as the butterflies wouldn't stay still, were quite small and the light levels in the hot house were not great.

However, some of my favourites were these... 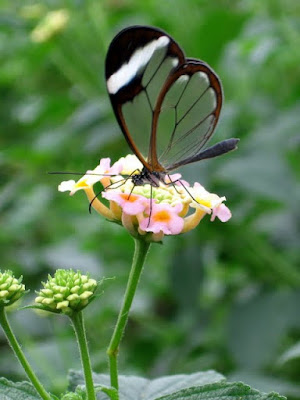 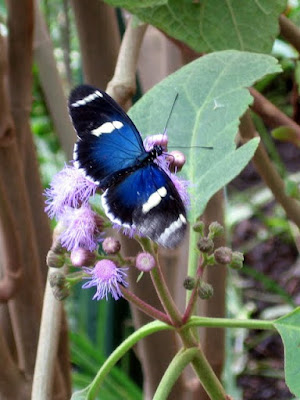 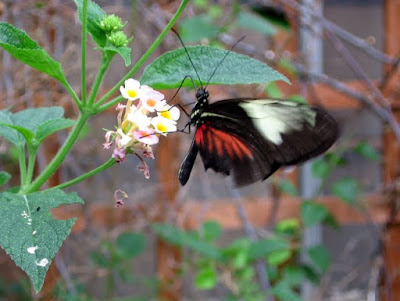 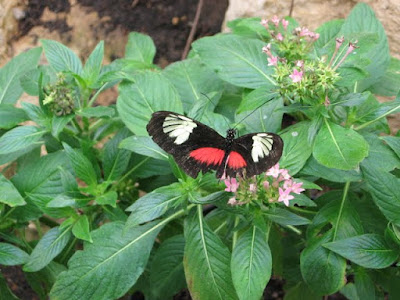 There were also a lot of birds in the hot house, all apparently chosen for their non insect eating ways. 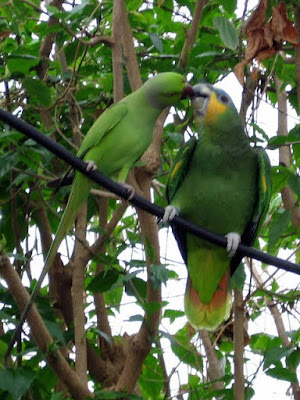 And some very big carp. 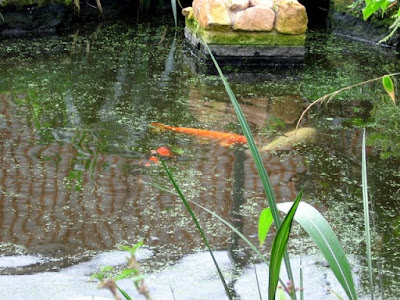 Plus at least one iguana who was very curious to see what everyone was doing. 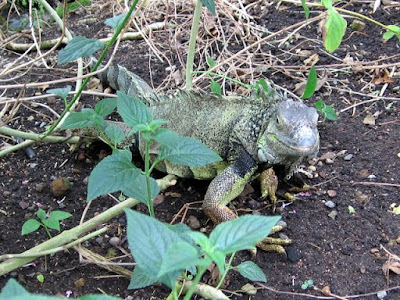 If you want to look at all the pictures I took, they can be found over at Picassa - here.

A nice place to visit and one I could see me dragging Dave around at some point.
Posted by Julie Spriddle at 11:11 1 comment: