After a mild run up, it seems like autumn is suddenly here. There is a cold bite to the air, trees are dropping their leaves, the cats have started staying indoors, evenings are drawing in and my thoughts have turned to winter knitwear.

I actually spared a thought for the coming winter a few weeks ago when I sorted out M's coats. Being a fast growing girl she needs new coats every year and hanging them up lead to me looking at her scarves. Sadly, M has outgrown the lovely cabled scarf she has been wearing since she was about three. This was a bit of a shocker for me as I don't think of scarves as being something you can grow out of, but she has. If we wrap the scarf in question around her neck twice (as you do) the tails are very short, with no weight to keep the wraps in place let alone keep the draft out of the front of her coat.

I declared it was time to knit a scarf, my first in several years.

After talking to M, she came up with a design...
Cables. It has been a long, long time since I attempted cables.

I dug out my copy of the Harmony Guide to Cables & Arans, quickly feeling out of my depth and realising I have no idea how to read a cable chart. This is something I'm going to need to fix in the future, but with winter looming I decided to wing it.

Using M's design as a guide I swatched some simple 2x2 cables, setting them inside some bands of 4 purl, with two single purl columns separating the middle cables. Most of the twists are on the eighth row, with one cable being offset and twisting on the tenth row. I added a 2x2 rib to each side to finish.

I had a go at charting the result myself, but it's not quite up to Harmony Guide standards! 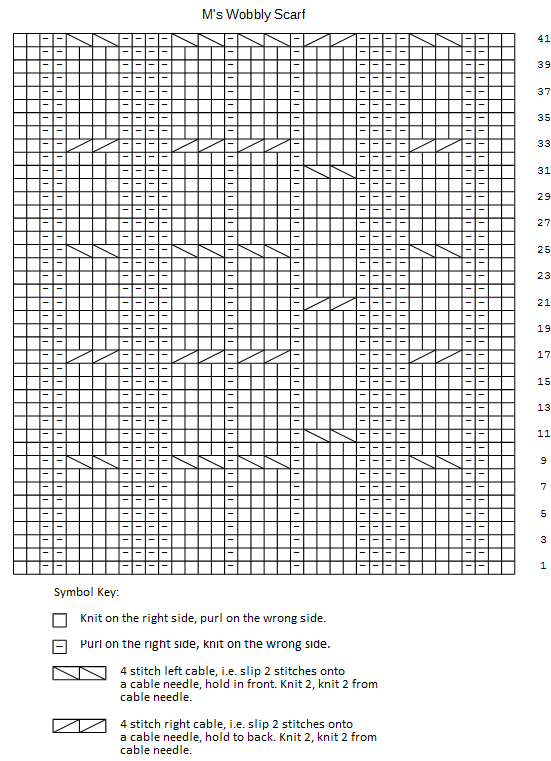 This sounds more complicated than it was, mostly I had to keep track of row counts so I knew which cable I was working. I also had to watch the direction of the twist as M wanted the cable to snake from side to side rather than twisting around.
After some thought and in the hope of speeding up the knit, I decided to add a keyhole to this scarf as well as working the yarn double. I wanted the extra loft and to make it easier for M to put on herself as she has problems with repeatedly wrapping a scarf around her neck.
Vital info -


The final result is a little on the long side because I was sizing for a scarf to fit a six to ten year old.
So here we have the final scarf.

Posted by Julie Spriddle at 19:52 No comments: