A rainy bank holiday and a new car seat

Yesterday was the late May Bank Holiday which marked the anniversary of the start of my maternity leave last year, but otherwise was a fairly unremarkable day. Constant rain throughout the day meant our plan for a picnic had to be put on hold and as new parents we're still unsure of our options for a day out with a very small child when the weather isn't co-operating.
So I guess I should start with a quick call out to parents with small children, what do you suggest as a day out when it's raining, blowing a gale or being very cold?
Yesterday aside, we have had some excitement over the past few days, although in the first case it's excitement I could do without. I ended up needing to see the out of hours doctor as I had a serious allergic reaction to a cause unknown. An awful lot of antihistomines later and I'm on the mend, but still no wiser as to the cause and therefore unable to do anything to avoid a repeat performance. Needless to say I'm racking my brain as to the cause, but as of yet can't think of anything I did that was obviously different.
Saturday we drove to Milton Keynes to buy M's new carseat, which we really needed before she outgrew her baby seat. Admitedly we probably had a month or two left before she was in desperate need of a replacement, but it's really not something I wanted to leave until the last moment.
After doing the usual rounds in terms of research I decided I wanted to keep M rear-facing as long as possible, or at least until she's about four which presented a problem since Group 1 carseats on the highstreet seemed to all be forward facing.
The internet came to my rescue and so Saturday found us visiting the In Car Safety Centre which is a specialist carseat place which I found via Child Car Seats and Rear Facing. After spending nearly two hours there, over an hour of which involved trying out carseats in my car and persuading a reluctant M to help check fit we finally settled on a seat that fit the car, fit M and had plenty of growing room in it.
This is a surprisingly tear free M in her new carseat after the drive back to Coventry. 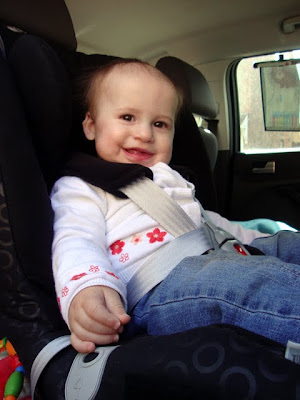 I say tear free because M is a bad traveller; whereas most parents tell me their babies/children enjoy being in a car, M never has. I do what I can to make journeys tolerable for her, providing distractions and breaking up long journeys as much as possible, but my little girl just wasn't born to roam.
The surprise hit of the journey home wasn't the new laptray toy we bought her while we were there, but mirror baby (in the mirror I bought so I can keep an eye on M whilst I drive) who she happily pulled faces at the whole time. Fingers crossed the novelty doesn't wear off and not being cramped in her baby seat will make travelling in the car a little easier on M.
Posted by Julie Spriddle at 15:40 No comments:

A block a month doesn't sound too difficult

A while back, when M was tiny, I tried to indulge in crochet whilst she was asleep in my arms. This worked well until I was forced to return to work and suddenly found that all time was at a premium meaning there was and is very little for myself which effectively stopped all craft related activity.

I'm sure this ongoing hard slog is not good for me but there is no sign of things letting up. In fact with the recent redundancies at work I suspect things are set to get worse.

In an effort to distract myself, I've been trying to make small projects again and came across a block a month CAL on Ravelry. The idea is to make one block a month throughout the year and after twelve months, join all the blocks together to make a blanket. Block patterns are offered in either six or twelve inch squares and I thought I'd have a go at the six inch ones... Mostly because I really don't have the time available to be ambitious and I wanted a project which is achievable.

Decision made, I started the January block in March with lots of enthusiastic help from M. 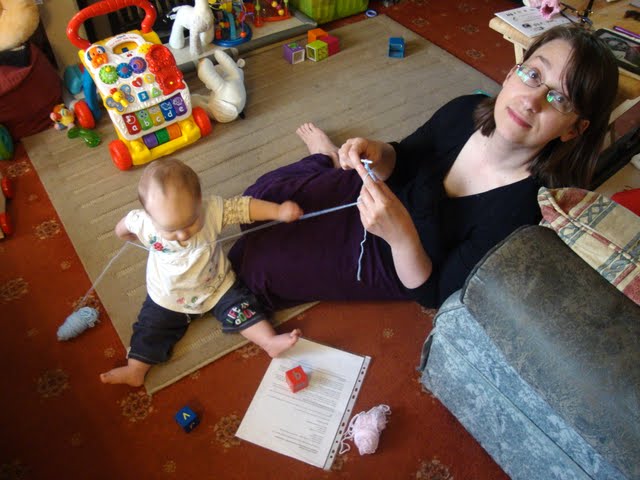 Now that I'm back at work I find I have so very little time to spend with my baby girl that I prefer to spend as much of the time that I have got in her company as I can. This means for me to indulge in any hobby type activities I need to be able to do them around her. M wants to be involved in everything I do and so I anticipate her joining in, choosing my yarn accordingly and providing a chunky hook for her to wave. M's natural tendency is to mimic and so she 'll study what I'm doing intently before happily prodding the yarn with the hook. 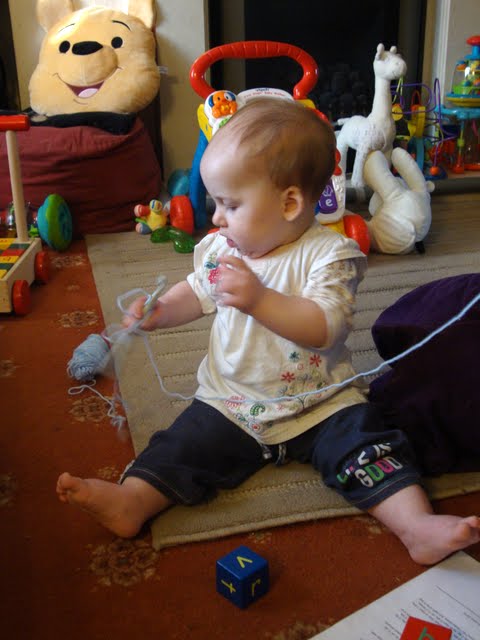 The January block goes by the name of Smoothfox's Flower Button Granny Square, designed by Donna Mason-Svara AKA Smoothfox. The pattern itself uses American notation and is very clearly written making it easy to follow. I chose to use two colours rather than the three specified in the pattern working in a standard baby DK on a 5.5mm hook. In one month I managed to make four squares which is quite an accomplishment for me at the moment!

Making the most of Easter

Easter has been and gone already, which was (thanks to the upcoming royal wedding), the first of two back to back double bank holiday weekends. With work continuing to be horribly stressful I was determined to do something fun especially since Dave decided to stay at home rather than abandoning us for Maelstrom as is his usual habit.

Fun turned out to be a trip out to Coombe Abbey Country Park on Saturday for which Richard joined us and on Sunday we headed to Ryton Gardens.

Our last trip to Coombe Abbey took place just a couple of weeks before M was born, when walking any distance at all was painful on my poor swollen feet. Then, the park seemed impossibly huge as I tentatively picked my way along the paths... On Saturday however I'm pleased to say Coombe Abbey seemed much more manageable and we saw a lot more of the park.

April has been unreasonably warm and the full blossoms of a cherry tree provided welcome shelter from the sun. 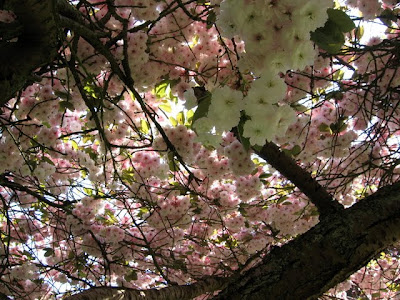 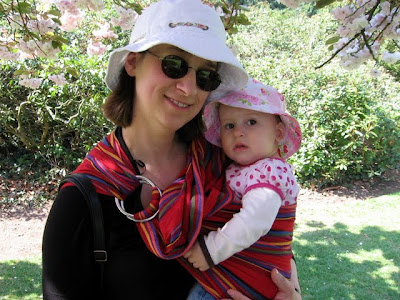 After which we walked through some woodland with very big trees, finding an obstacle course and playground aimed at children much bigger than M. Naturally Dave had to put it to the test as did quite a few other dad's. 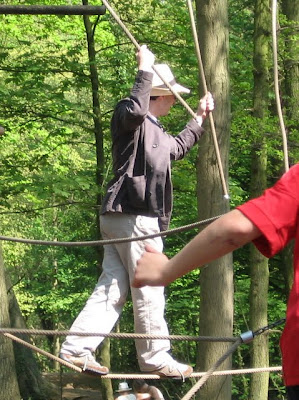 We had a picnic lunch and a very excited M was persuaded to have a sleep before we went for a brief wander beside the lake, eventually admitting defeat because the sun was too fierce.

Ryton Gardens lived up to expectations on Sunday and having visited there a few weeks ago it was fascinating to see how the place has changed in such a short time. With no particular agenda or schedule to keep to, we allowed M out of the sling so she could wander around and seeing her cruising around garden benches really brought home to me how fast she's growing. M was again very excited to be out and about; we had to hastily intervene several times to stop her eating sticks or leaves but she loved it. 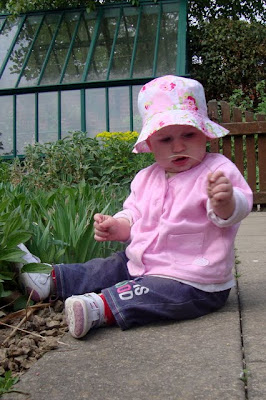 I also discovered that eating a picnic lunch with an awake baby on my lap meant I was obliged to share. 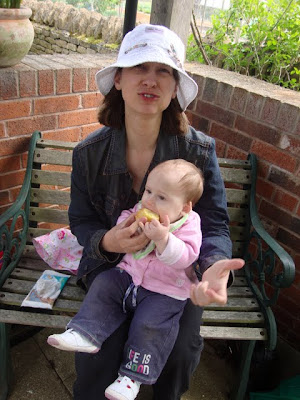 All in all, both days out were good, relaxing and fun. Just what the doctor ordered and I mostly avoided thinking about work. With a double bank holiday I reverted to just being M's mummy for a couple of days, which was great.

Posted by Julie Spriddle at 14:12 No comments: